The veg plot was postponed as today went by in a flash.  This morning I had more jobs to get done than I realised but I enjoyed the day and to top it off Steven stumbled across what I think is wild plum tree (aka bullace if I remember rightly?).  I was so excited when he showed me it.  It's half way along our lane (apx 1/2 a mile away) and on top of that, next to it is another apple tree.  Huge lovely looking cooking apples! 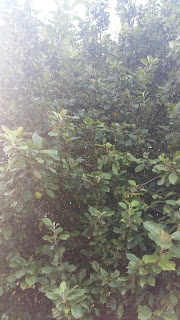 I follow Pam Corbin (Pam the Jam from River Cottage's TV programmes) on twitter and told her we had rhubarb, gooseberries, plums and windfall apples and she said rhubarb and plum would be nice and then suggested I make pectin with the windfall apples.  Well I never knew you could do that, so that's taken it to another level in the preserving department.  I'll look up how to do that over the next day or 2.
Today I spent sorting the fields out, the daily task or removing the horses manure.  Then I took a look in our woods.  Its a small collection of trees, mostly Black Poplar I'm told, which is where we're planning on keeping the pigs next year if and when we get some.  We spent quite a bit of time with the horses this morning and both kids rode and thoroughly enjoyed it.  I've just got in at 6:45pm after being at a kids party with my son.  He had a lovely time and I bought a bottle of red on the way home, so win-win.

Posted by Tracy Chadfield at 12:03