Another weekend is here :)

The damson vodka that I made last weekend is starting to have a decidedly pink undertone to it (pictured pre pinkness!)  The kilner jar seals must need replacing as it leaked when I turned it on its head.  So Steven had the idea of using two together until I can replace them.  The jars are 3 litre jars and when I looked on ebay, they all seem to be up to 2 litre max which is a slightly smaller diameter to the ones I have, according to their measurements.  So that’s raspberry vodka and damson vodka on the go.  I hope they taste nice as I actually don’t like vodka!
For the raspberry vodka, I’ll decant it in December and use the raspberries for ice cream topping for adults at Christmas, or even for the middle of a special cake.  I’m hoping this drink will be like drinking summer in winter and warm us through the cold and dark nights.
This weekend I’ll be picking sloes for sloe gin.  I’ve never make it before, well I’ve never made any of these actually, so it’s all great learning.  I must remember to make a note of the recipe I use though, as if it tastes lovely next year, I’ll struggle to remember which one I made!
Now Autumn is here, we’re also going to be foraging the elderberries in an attempt to make wine and some elderberry winter syrup.  I’ll take photos of each step to share on a post dedicated to that.


Have a lovely weekend all. 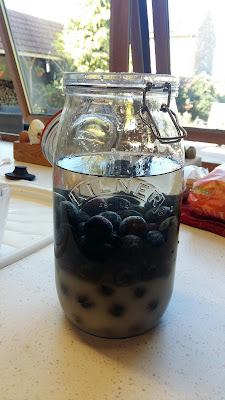 Posted by Tracy Chadfield at 05:54