Sheep move and a bit of sad news

After more hard work from Steven we moved the sheep to their next grazing spot which has lots of grass and trees for them to chomp down on. Of course only time will tell if it's secure enough for them as they are quite the escape artists. They do come back for the buckets if food we offer them though so at least we have a plan b if we see them running up the lane!
I also bagged a load of cooking and eating apples today which I am really pleased with. I made a tester stewed apple which was lovely so I think I will do a big pot and then freeze individually but also save some whole apples to see how long they will last.
We were lucky enough to be invited to Sunday lunch today so I haven't had to make our own which was nice.  However that was the softener to the hard task of dispatching a duck. It was in pain and had something wrong with her that we couldn't put right.
Remember I mentioned were moving in to the time of the year where we need to be on top of the muck heap and keep it as low as possible? Well thanks to freecycle we now have a few regulars who come and make a big dent in it literally! I'm also nearly ready to fill the rest of my beds with it too. I didn't get in the veg plot today but there's not too much left to do so I will try and plan it in this week.
Also I've moved the dogs' beds back in to the kitchen in front of the Aga. They've been living in the utility on a night through the summer but Buddy is looking so thin (his condition) so I feel they are better where the Aga is for him to sit in front of if he prefers. The puppies will no doubt lay on the kitchen seats instead. Cheeky. 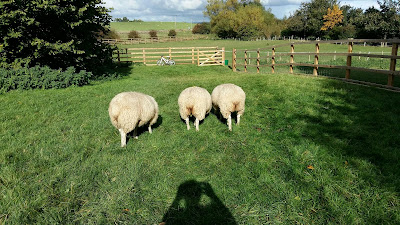 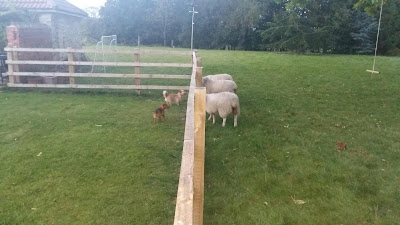 Posted by Tracy Chadfield at 06:57