I love freebies.  I've just been given these seeds from my lovely Dad who has given up his allotment and asked if he can help out on mine through the year. 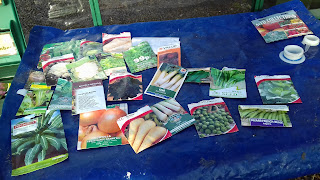 I have taken delivery of some fruit trees.  Sadly, I had to pay for these :).  There’s a pear, fig tree, almond and apricot.  At the moment they are all in temporary containers in the greenhouse.  Their names from the website are:
Large Fig Tree 'Brown Turkey' 1ft Tall in a 2LPot.Ready to Fruit, Sweet Taste
Apricot Bergeron Tree 4-5ft Tall, Self-fertile Sweet & Tasty Orange Flesh
Conference Pear Tree 4-5ft Tall, Self-Fertile & Heavy Cropper, Ready to Fruit
Large 4-5ft Sweet Almond Tree 'Robijn',Ready To Fruit, Nice Pink Flowers.
Thanks for the website recommendation, Dawn.
I don’t know where they will stay permanently, but they’re all small enough to be in pots for now.
Last year we had tonnes of currants (black, red and white) and we used them all.  Cordial is on the menu this year, but I need to find out how to store it long term, I have in my head that it doesn’t freeze but I don’t know if that’s true.  Elderflower was my son’s favourite and a beautiful taste of spring in a glass, with the promises of the great things to come.
This is the fruit cage we have made that in currently being changed into temporary chicken housing.  It'll do a great job over the soft fruit come summer. 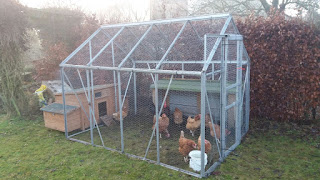 I must get round to pruning the raspberries but I really don’t know if they are summer or autumn fruiting as they fruited the whole way through!  So I am worried about killing them off or stunting their harvest. Same for the currants for their pruning.
We have cut the asparagus ferns down and top dressed with horse muck that’s been rotting away.  Asparagus was one, maybe the, first foods we harvested in 2016.  I look forward to that.  It took me by surprise last year with the amount we could harvest.  I may sell some this year if there’s too much for us.  I’ve also found some nice recipes so we don’t tire of it.
I shall soon be forcing some rhubarb too.  Just one plant I think.  Rhubarb is one of my favourites.
I started preparing for sowing this weekend.  Maybe too early I know, but that’s part of the experiment.  I’ll soon start the onions, leeks, tomatoes, peppers, chillis, broad beans, salad leaves, spinach and cauliflowers.  I am only doing a few of each (she says).  Also I am going to get my strawberry plants that I took from runners under cover to see what happens.  This is it, we’re off on the 2017 road to self-sufficiency!
A harvest of a different kind now... the chicks we hatched early December have been moved outside into the big barn. 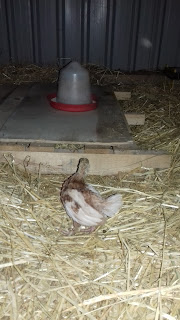 They have heat there still but plenty more space now as they'd outgrown the brooder. I am not sure what will go in the brooder next. Steven made a heat lamp from a mixing bowl, heat lamp bulb and some mesh (to stop them burning themselves on it).  I was super impressed and a fraction of the cost were we to have bought it in the shop. 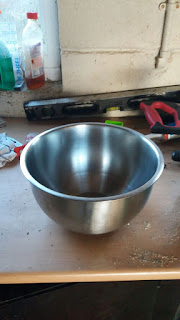 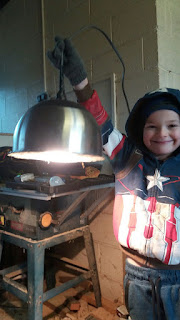 It was a very foggy day all day today with the temperatures barely getting above freezing.  The greenhouse door was frozen closed with the frost that developed overnight.  We use the tap in there for the water for the horses.  It soon thawed out.  This was taken when I was riding out this morning.  It was lovely. 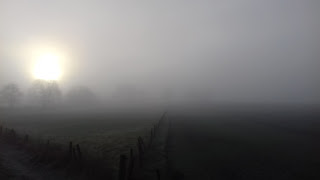 Posted by Tracy Chadfield at 11:02