A long time ago I came across a recipe on the bbcGF website called summer in winter chicken.  It's a really nice recipe and every now and then it pops in to my head as to how we can have summer in winter occasionally.
So the best way to do this for me, is to capture the foods we love in summer, and use them in winter.  Something I intend to do a lot of this year, and we didn't do too bad last year considering it was our first year.
There was an alcohol theme though!
I did raspberry vodka which was delicious, a really refreshing treat in a long glass with lemonade.


When the damsons arrived, I wasn't prepared!  So I made vodka with them too! I'd been given some bottles of vodka, and I don't like it, so it seemed the best option.
We decanted it at the weekend after 4 or 5 months and it really was like having a summer drink, very nice again with lemonade.
It went from this: 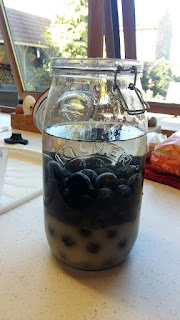 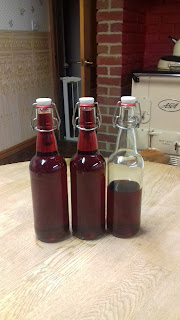 Isn't it a pretty colour?


Along with the blackberry scones I made at the weekend, it's really been giving us a taste of things to come for 2017.
I intend to plant more raspberries and also get some brambles (blackberries) planted as they are non existent here in the wild.  The sloes and elders made up for that though.
Can you feel the build up to the growing and preserving year starting?  I can!

Posted by Tracy Chadfield at 01:00