Just part of the day in the life of a smallholder?  There's been a few jobs that Ste has wanted to get done which he's managed to since he had 3 days off work this week.
The first one was due to me changing my mind on something.  When we moved here, we housed the rescue hens in a part of the veg plot which only had flowers in it, as at the time I was sure I wasn't interested in flowers.  I've since come to realise their beneficial properties for the bees if nothing else, so the fence he put up to keep the hens in, has now been removed and used elsewhere, allowing me in to make the space into our fruit garden.  As I can't remember what was in there, this project will be done over the Spring and Summer so I can make sure we put everything that's in there to some use.

We're getting some new apple trees off Kev, which will go along the back trellis and in place of some fir trees which are just out of sight here.  The fir trees will go to another location where we need them.  Then the grass will become the soft fruit area.  So many ideas!

The pond had a leak in it, so we bought some more liner and Ste has updated it, the ducks love it :) 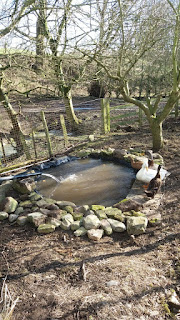 The fence he put up last year to keep the ponies in their paddock, doesn't keep the sheep in there when it's there turn.  So he had added an extra rail on. 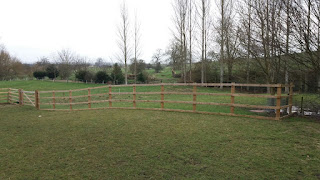 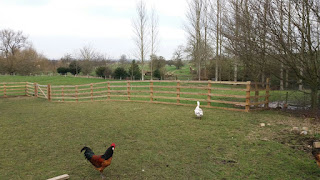 He moved one of the new IBC tanks in to the veg plot and has come up with a genius way of collecting rainwater in there where there is no guttering etc to get the run off from.  We hope it works well, after all, we get a lot of downpours. 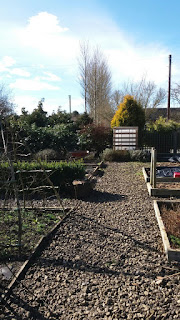 He also managed to fix up a hose pipe connect direct to the IBC tank so I can use the hose pipe in there.  The flow will be slower but it's free!
We will grow things around the wooden frame to disguise it.  I'm really pleased with it, very inventive.
Jack and Ste also picked us girls the first daffs of the year.  Spring has arrived at our smallholding. 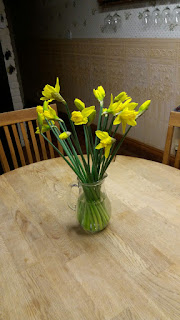 Posted by Tracy Chadfield at 06:45