Well this was a weekend to remember.  Having the extra day has been brilliant to getting this done on the smallholding.
First up the pigs came out in a skin condition again which the vet had already identified as Erysipelas, harmless if caught early, which we did within 12 hours. 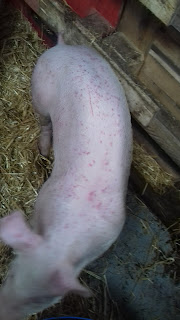 We collected the antibiotics from the vets and set about it ourselves with the help of our lovely neighbours who is a doctor and his wife, a nurse!  The pigs were in good hands and it's cleared up already.  They had two doses, one on Saturday and one today (Monday).
On Sunday, we moved them from the barn to their new accommodation in the paddock and sat and watched them for a while. 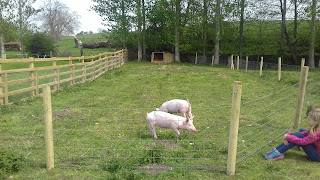 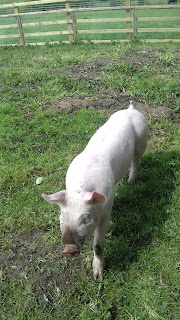 As they're old enough to be off the heat, they can be sent out to work now the frosts have hopefully passed.  We hope that they will turn the paddock over as it's riddled with nettles.  We chopped the nettles down before they went in there as they would possibly suffer from nettle rash.  They don't have hard hides yet and are still easily scraped or cut.
Steven carried them from the barn to the paddock, needing a helping hand for the heavier one as boy they can wriggle and are so powerful.  Another week and we wouldn't have been able to move them like that.  They love their new pen which is made from pallets begged from our farmer neighbour. 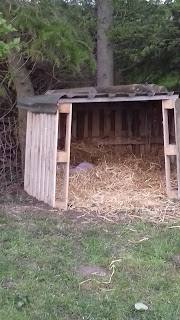 Grace helped bring the straw down for their bed, using an ingenious transportation method. 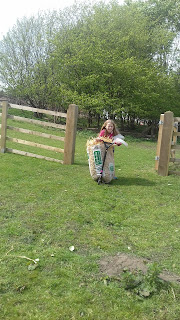 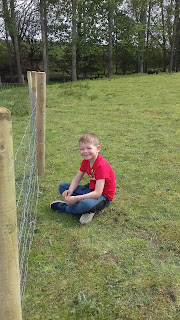 We also got the sheep into the stable when the horses were in the field, and gave them a tidy up on their back end as they were getting matted.  No photos, I'll spare you!
I got some rhubarb vodka on the go for Christmas gifts and to help keep us warm this winter. 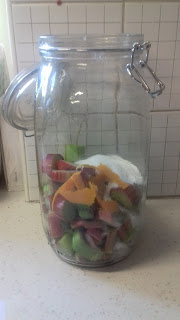 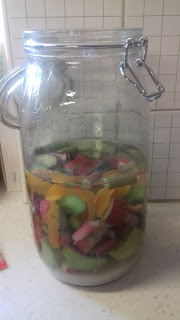 The veg plot is really taking shape now and should be fully up and running by the end of this month. I managed to get the red cabbage in which I have a soft spot for, the sweetcorn and sunflowers (heads will be for the chickens).  I've sown some more peas, kohl rabi and calabrese to ensure we have a successional harvest of them.
Tonight I harvested kale, swiss chard, asparagus and PSB for our tea, making a cottage pie using a slimming world recipe (inspired by Lou, thank you) and it was delicious with the PSB and asparagus on the side. 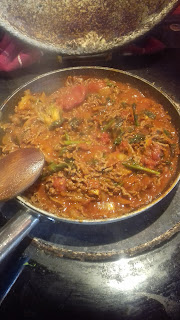 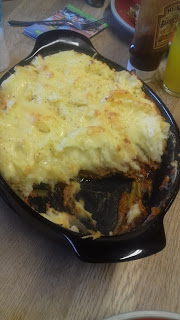 The first fruit has arrived on my tomatoes so I will start feeding those ones which I am really pleased about. 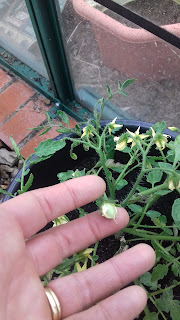 Posted by Tracy Chadfield at 12:19