Photos of our harvest and growing update - we're in full swing!

I thought I'd take a snap shot of some of the things going on in the veg garden and veg plot. It's that really busy time of year when you don't really know if you or the weeds are in charge. One thing I wanted this year was more potatoes and so far, so good. We're harvesting the first earlies (swift variety) when we need them and the growing space is being turned over to squash, courgettes and the like. They are beautiful and I'm very impressed. 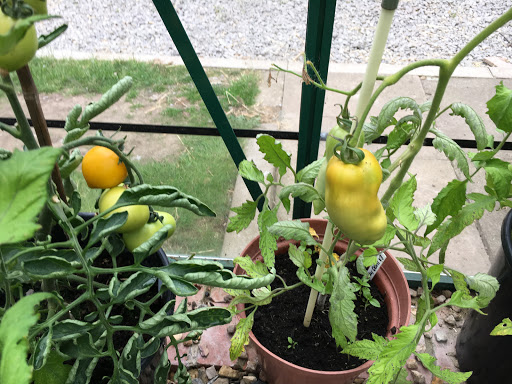 These salad blue variety, my 'out there' choice of the year are starting to flower and their flowers are blue too! They look lovely against the green leaves. 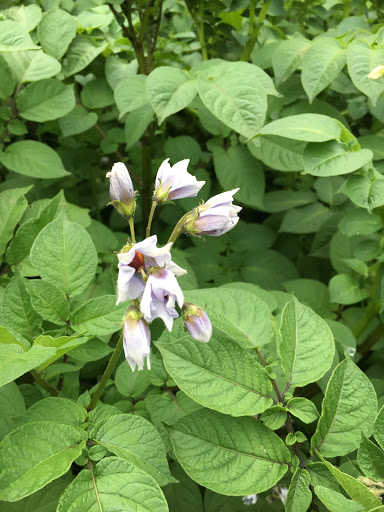 The bags were disappointing. Hardly a meal from 3 seed potatoes. Next year I'm trying a different method. 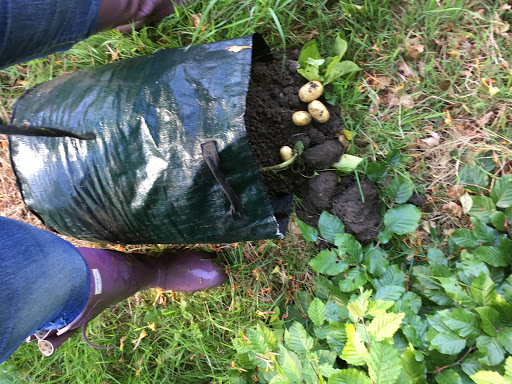 The tomatoes seem to be doing well though I'm worried no more flowers are appearing on those with fruit on already.
There's Jersey Devil for preserving 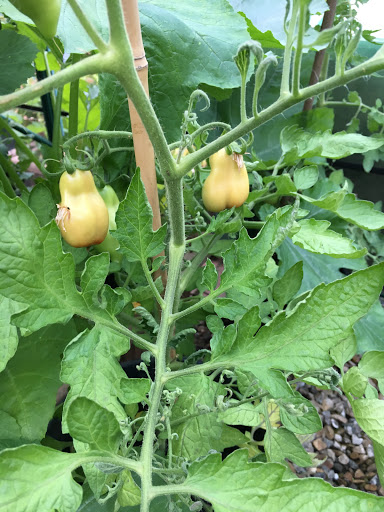 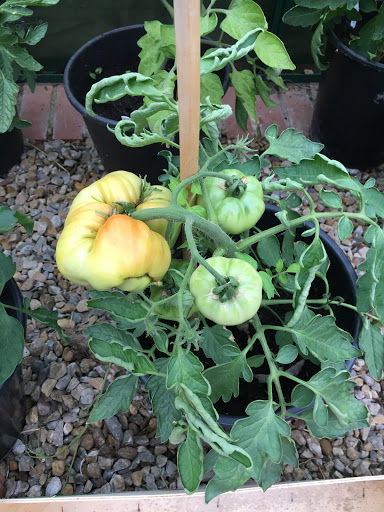 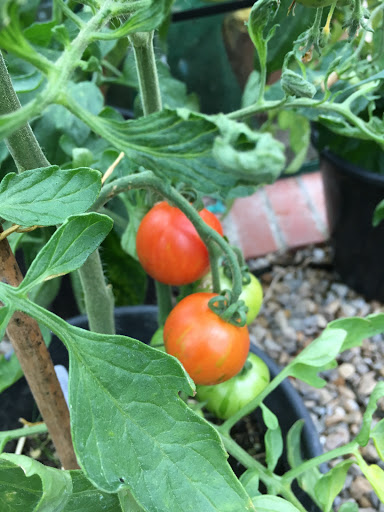 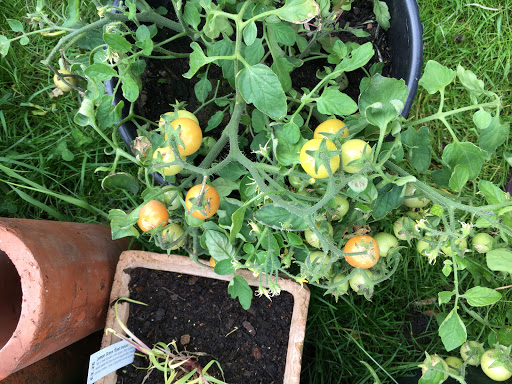 The aubergine is flowering 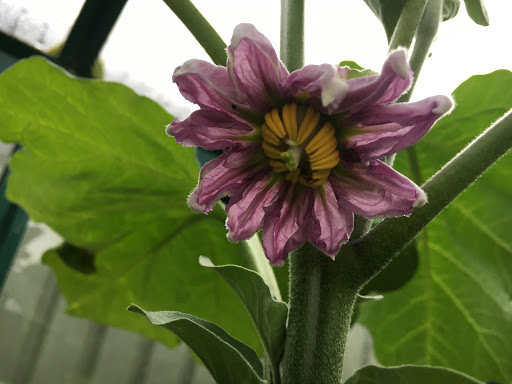 The cucumbers are too - I didn't appreciate how tall cucumbers grew! 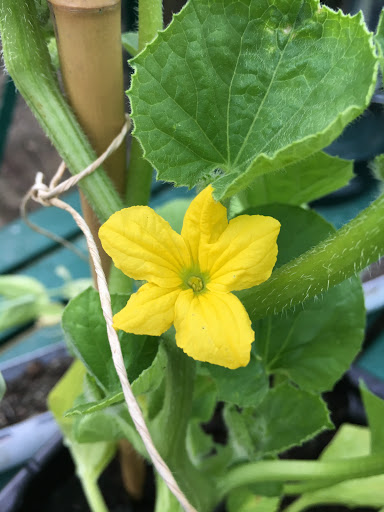 At the weekend we harvested our first broad beans, more courgettes (first green), a yellow scallop, out first large tomato and a few strawberries.  I took a mental note to go back and check for more strawberries, which we did last night. 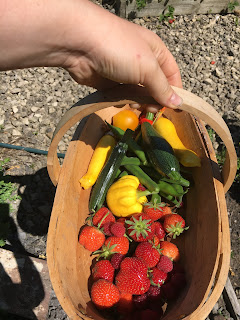 Boy we were not disappointed.  We stopped picking when the trug was overflowing and it help 4 kilograms! 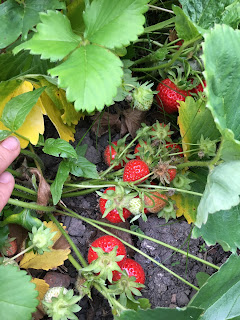 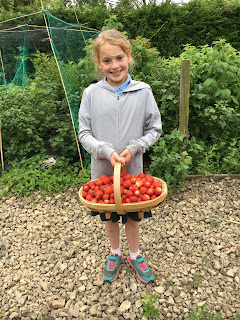 Remember my skeletal brassicas?  Well they seem to be fighting back.  Despite the lack of leaves, we have some broccoli heads forming which may be stunted but I will take anything given I thought we have lost the lot.  They're all coming at the same time despite planting a couple of weeks apart.  I'll freeze them, as some seem to be wanting to go to seed. 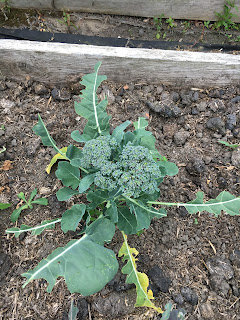 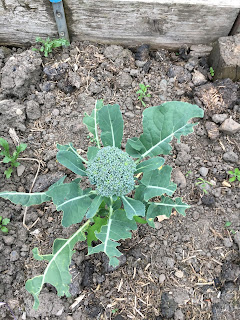 Grace is on nightly caterpillar watch and if you look closely you can see how many she took off just 1 plant.  Speaking of which my PSB is ready already!!  I only planted it this year so I am thrown and slightly concerned I won't have any next year now. 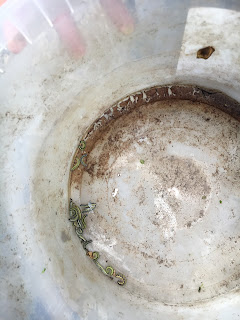 Next year I am going to net and enviromesh the lot but it is a lot of money to fork out at once.
This is my bean bed.  Climbing beans in here, with more to go in and I'll risk some direct sowing too. 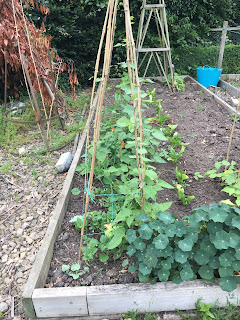 I have also sown some more spring onions as I lost the first lot.  Plus I've some cauliflowers in, these are the all year round variety.  I'm not sure if we will manage to get any now, but we can try. 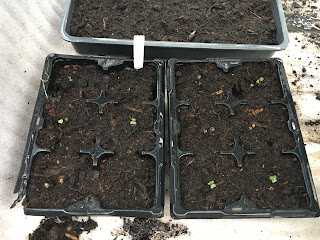 All the rain we had followed by the heat wave has sent everything in to growing overdrive, this lettuce is nearly as big as the kids! 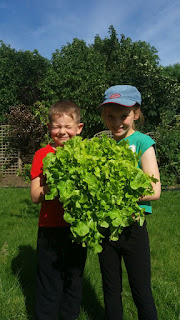 The sunflowers are starting to open 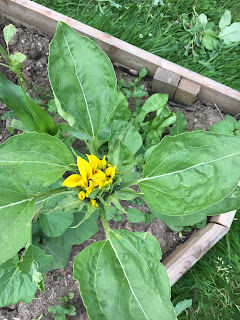 More than anything, it's been too hot to work in it for too long, so we've taken some time out to sit and enjoy the rays every now any again.  Although, when I looked up and saw this, it did make me chuckle.  My daughter getting a Frisbee out of the bush whilst Ste had 40 winks! 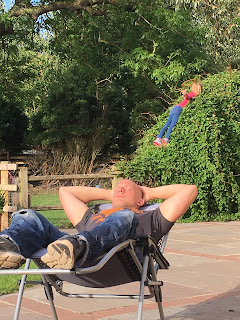