November update plus over wintering seeds and planning for 2018 sowing

Now Autumn is half way through, it’s got me thinking more and more about seasonal sowing and growing.  As well as preparing the ground for the next season (bean trenches and manuring) I’m also thinking about what I can over-winter, that will give me extra early harvests next year.

This year (2017) my broad bean harvest was abysmal.  I don’t know what got to them, but it just did not work for me.  A variety that can be planted in the Autumn here in the UK is Bunyard's exhibition.  I've purchased some from Victoriana Nurseries and have been sowing them.  As I live in the North East, to grow these over winter, I feel these plants would need some protection to get through so once they start to show, I cover them with a small cloche tunnel of some description.

Broad beans are part of the legume family and as I follow a 4 year crop rotation, they are to be planted where the onion and root family were the previous year.  The broad beans I have sown directly are 2cm deep in double rows.  The double row is (about) 23cm apart and the space between each double row is 60cm to allow me to get in and harvest the beans.  A double row of these Autumn planted beans will be followed by double row in February, March then April. That should see us through.  Depending on how prolific they are, these plants will hopefully be cropping well into July and August and therefore once the seeds are sown, that bed will be unusable for anything else until the plants are spent.
Other legumes that I have decided on for 2018 growing is a climbing pea called Victorian Colossal.  I’m really excited to grow this variety based on research I’ve done.  According to Victoriana Nurseries, this pea also does well when grown on a trench, so I’ve dug a trench where the peas will grow next year too.  This variety doesn’t seem to be an over-winter one so in the meantime, I looked into what variety would be good to try and over-winter.  Douce Provence comes up regularly and I grew this in my first year here which was a good crop.
If you recall, I ordered my Autumn planting garlic, onions and shallots in mid-September which I’ve now received and are mostly planted out.  A few garlic are left to do.  These all come under the 'onion and root' part of crop rotation (along with leeks) and need to be planted where the potatoes were.  Next year, the legumes will follow on from the onions and roots meaning I might be able to get a late summer crop but I’m getting ahead of myself now.  They are coming through spectacularly, especially the shallots. 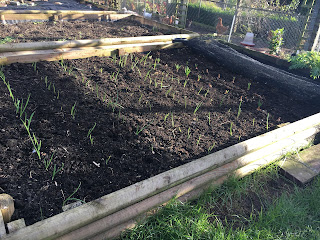 We've also got a visitor for a couple of months.  The guy over the river, who helped us with taking the pigs to slaughter, offered us a tup for a couple of months to hopefully cover the girls, giving us April lambs.  He seems nice enough so far, though sometimes they can get aggressive when they are with their girls.  The kids have been told not to go near him just in case. 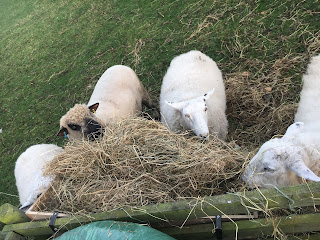 Steven and I had a child free morning today, something we never have, so we headed down to the area where the pigs had been, to see how many weeds have come through.  Not too many to be fair.  No more should grow now as the day time temperatures are consistently below 6C I would say.  We've some exciting things planned for this area next year. 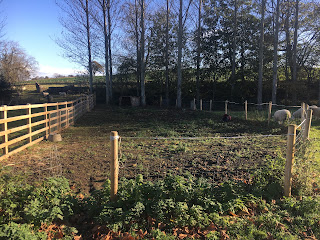 I've also given the greenhouse a further tidy, binning another few plants that were done for.  Sadly, the courgette plant which serviced us so well has gone to compost heaven.  It was a golden zucchini variety - a freeby from the GYO magazine and I will definitely be growing them again next year. 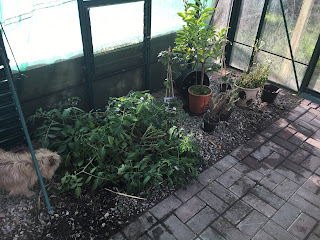 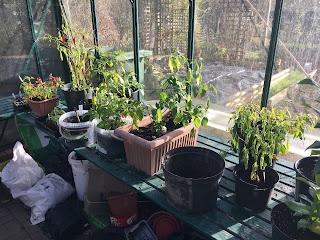 Things are slowly returning back to normal here after our busy times.  I'm looking forward to a normal week at work, Monday night preserves tomorrow and bring you updates on the meat birds which are growing at a steady rate.

Posted by Tracy Chadfield at 10:56