Time for an update on the goslings that were hatched.
After losing the one to the pond, the remaining 4 are doing extremely well and following the adult geese everywhere.  They seem to be thriving and enjoying life.  The day or two after the first lot arrived saw a few strange things happen.  Firstly, the other Mother Goose abandoned her eggs in favour of walking round with her friend and her friend’s goslings.  So the remaining eggs in the shed went cold and we thought were goners.  Anyway, as we said we would, we let nature take its course and left them there.  We had a couple that hatched ok but died  for one reason or another and some that died trying to hatch.  A day or two later, when one was trying to get out and struggling, we decided nature had its own way for long enough and we helped the little dude out.  Mother Goose has already rejected a couple of goslings that hatched after the first day (that accounted for some of the deaths I mentioned), so we decided to pop Ryan as he is now called, in to the incubator and see if he made it.  He did and now Steven and I have been adopted by him as his parents!  His favourite past time is swimming round in the sink.

With this in mind, when 7 Vorwerk chicks (breed of hen) came up for sale a day later, I thought they would make great friends for Ryan and we were right.  For now anyway, before he gets too big!

It wasn’t a silly move though as I now have the 2 breeds I really wanted, Lakenvelder and Vorwerk.  I shall breed these myself over the next year or so, when I introduce some from a different blood line (some people say it matters, others say it doesn’t). 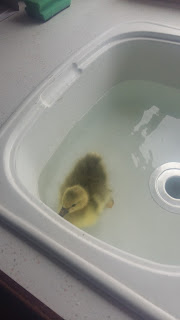 Posted by Tracy Chadfield at 12:16