Spring is around the corner

Over the weekend we managed to fill a 3rd bed with rotted muck thanks to the horses.  That’s 3 large beds ready for top soil at the end Feb. 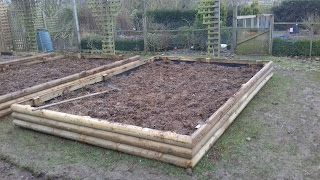 I am super excited to tell you about my hot bed.  It’s not an outdoor Victorian one, it’s an internal greenhouse one.  A hot bench I think is the correct terminology.  I knew there was something there last year but we didn’t know what it was and didn’t use it, we just used the space for something else.  This year however, I’ve found out how to use it and am in the middle of preparing it for seeds.  This is what it looks like now, I’ll share it with you again when it’s ready for use. 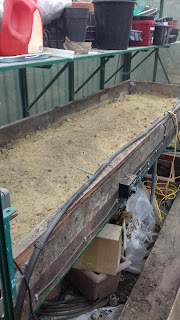 It’s  amains powered thermostat that heats up wires in the sand and we think we’ve finally found where the mains power runs to, only it’s not attached to anything.  We’re going to get that sorted so I can get sowing in there.  It won’t be long now.
Having said that, I’ve started the sowing season already.  Too early some will say and I know and am prepared to take the risk.
I have got a couple of each of the following in:
Heat loving germinating seeds:  Tomatoes (different types), aubergine, peppers (hot and sweet),
Cooler germinating seeds:  cauliflower, cabbage, PSB, leeks and red onions. 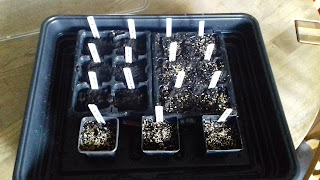 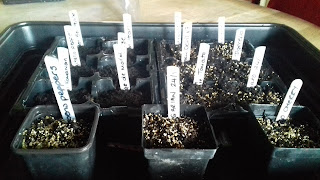 I was disappointed to find out that my new propagator wouldn’t fit in the airing cupboard!  This is where I planned for the heat loving ones to go, so I need to find them a new home.  When things are ready they will be moving into the part of the greenhouse heated by the paraffin heater.
My corn salad is up, it only took a few days to germinate however the first aubergines aren’t (they went in on 14th so I won’t give up yet).  It’ll be interesting to see how the salad copes.  It’s in
a propagator in the kitchen next to the window. 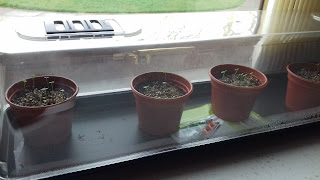 I’ve also decided not to get the polytunnel that I was going to get this year.  Instead, as a compromise, I’m getting a smaller, green one.  Now a lot of people don’t like these and say we’re throwing money away as they don’t last etc.  However for us, it’s the right decision.  If and when it breaks, the framework will be used elsewhere.  If it doesn’t break, great.  As long as it sees me through this year and some of next, I’m happy.
I’ll be putting the first early potatoes into bags and also a bed in the polytunnel and then outside when the weather allows.  They aren't chitting yet, a job for tonight maybe.  Again it’ll be interesting to see how it extends the season for us.
Spring is definitely on it's way.  Just temperamental February to get through yet.  I have still not managed to get my hands on to any Seville oranges, despite going to the shops much more than I care to!  What’s everyone else up to in January?
Posted by Tracy Chadfield at 08:10