Preserving is off to a start

After a post about summer in winter and batch cooking scones, I simply had to tell you about the marmalade I made last week.  For years, literally, I've wanted to make Seville Orange marmalade.  Now this may appear very sad to many folk, but not to me.  I never got round to it until last week.  Thankfully Tricia over on Tarragon & Thyme reminded me that the marmalade season is upon us!
After spending weeks checking with Tesco and the local grocers if they had any oranges to no avail, would you believe that my mam and I managed to acquire some on the same day!  Typical we thought, I now had far too many Seville's to use in one go.
Apparently they are good for freezing, so I froze the ones I didn't use and will be able to dip into them as and when we need a top up.
I set about making marmalade using Louise's recipe.  Louise was very humble about it, saying it's really easy to do and I can tell she's at ease with the whole process.  I look forward to when I feel like that when it becomes second nature.
Well after using her recipe (below) I have to say she was right, it couldn't be easier.  To top it off it tastes divine!  So thank you Lou :) 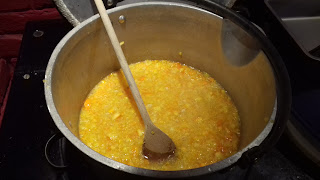 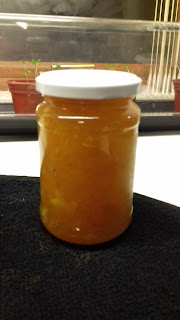 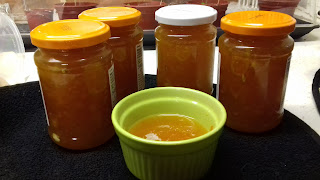 Now I did make a mistake, I forgot to water bath the jars after using them, so I will need to use them up quicker than if I'd water bathed them.
The simple recipe has the seal of approval from my parents, who both said they enjoyed the jar I gave them.

Easy peesey marmalade
3 oranges, not too big
zest of half a lemon
3 cups of water
half a kilo of sugar

Wash and quarter the oranges, put in a food processor, skin and all, and grind finely/to the thickness you like.
Add the lemon zest.
Boil in a a pan with the sugar, stirring now and then, for about 20 minutes.
Careful of the splatters!
Put in your sterilised jars in the fridge when cooled or water bath if you want to keep it for any time.

One thing I couldn't find was my zester, so I used a potato peeler and peeled the skin then used a sharp knife to cut into fine zest pieces.  It took very little extra time and I found it easier! 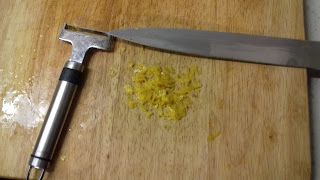 I also doubled the recipe which made the amount in the photos at the top.
So that's mango chutney and marmalade made for 2017's preserving list so far.
﻿
Posted by Tracy Chadfield at 01:00