Early in January I sowed some beefsteak tomato seeds.  The first lot failed which was my fault, they shot up before I realised.  Some I saved by replanting to their first leaves and some I started fresh.  Both have done fine.  Here's the beefsteak one (Brandywine) which needs potting on again.  It's also starting to produce side shoots which I am nipping out.  I've planted the other one which is as big as this one directly in the polytunnel bed to compare which one does best so I can just do that in 2018. 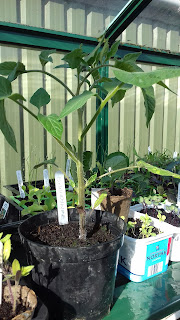 The tomatoes below were all getting far too big for their pots, so instead of a pot bigger, I potted them on into their final resting pots so to speak. 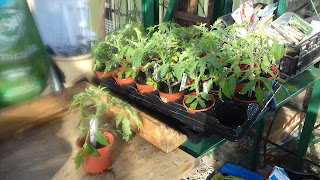 It took the best part of an hour but now I have 18 tomato plants ready. 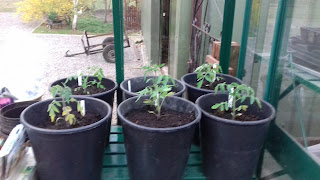 The tomatoes are the big pots, the smaller ones are caulis, cabbage and calabrese. 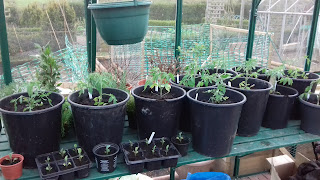 These little things are Gardeners Delight, sown after the first tomatoes in the hope of extending the season as long as possible.  I have some that have just germinated too and will keep sowing for a little while yet. 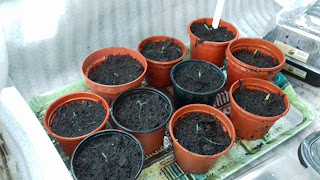 I also have a variety called outdoor girl which, as the name suggests, will be going outside when they can.
This weekend I will pot on everything that needs it and plant out the PSB for next year.  It's too big for its pot now and I don't want to have to pot it on again.
I think I am going to need more growing space !
Have a lovely weekend all, it's due to be sunny here so I plan to get in the greenhouse and polytunnel before they get too hot, then in the veg plot to get some much needed vitamin D.  I think Sunday afternoon may be a day of rest and enjoying some rhubarb cocktails.....

Posted by Tracy Chadfield at 02:02