Day 4 of my holidays has seen a beautifully sunny day here in the North East of England.  It's still breezy though but this year has been.  I've never known it be so windy for so long in the past but then I suppose I've  not been growing fruit and veg or looking after so many animals before, that the wind impacts?
I've still been getting the kids up at a decent time as mine seem to suffer if they have late mornings and inevitably later nights as they can't sleep.  The kids helped me by feeding and watering the chickens and then collecting the eggs.  What a haul from the last couple of days! 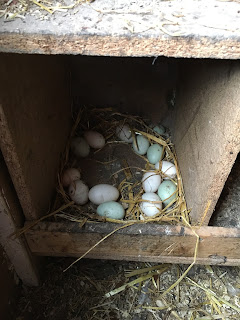 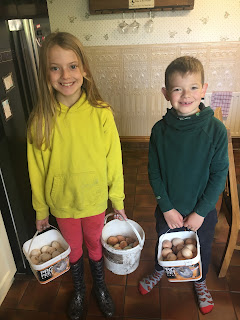 The kids spent the next couple of hours playing and I started off the Bachelors Jam or Rumtopf as it is referred to.  Growing up I'd remember an earthenware jar that was in my parents house but I didn't know what it was for.  Then when I started blogging and read Patty Pan's blog about Rumtopf and I realised what it was for.
My Mam kindly gave me the pot when I said I was going to make some. 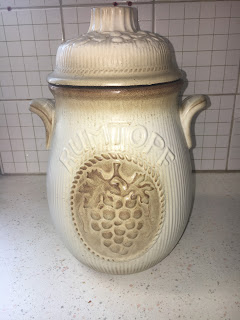 ﻿
I added 500g blackberries from our haul last night (which was over 3kg!) along with 250g sugar and left it for an hour before adding a litre of brandy as this is what was given to me by my lovely Mam at the same time as the Rumtopf jar. 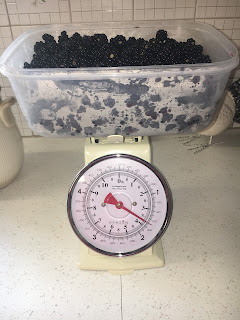 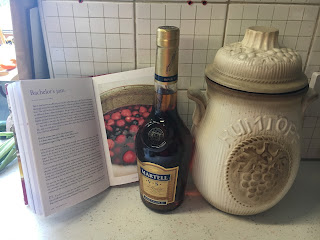 I was supposed to make a crumble at the same time but the clock was ticking and I was itching to get out in the veg plot so I left that for later and put the brambles back in the fridge to keep a few more hours.
The bed I'd tasked myself with today was the fire pit bed.  The previous owner had burnt allsorts in it and I'm forever finding nail, hinges and the like.  I added manure to the soil along with blood, fish and bone and hoped for the best.  Well the cabbages did marvellously and I'd put off harvesting them until my 2 weeks break.
It was a mammoth task.

They were dug out and the area cleared of weeds which was back breaking but very worth it. The Christmas potato order has just arrived so I set about putting them in.  I ordered 15 tubers from crocus - 5 each of Charlotte, Duke of York and Pentalin Javelin.  These were the only ones I could find as the other online stores I either missed or didn't sell any.
I planted them all 30cm apart and 60cm between rows as there was plenty of space to do so.  Here they are with their beds now looking like something from Halloween (picture taken from the opposite end of the bed than the earlier one). 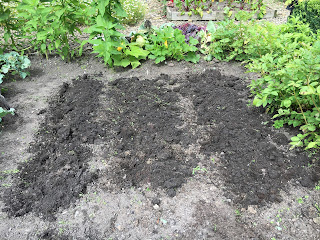 Here's the bed once I finished with it.

I then tidied up another bed which wasn't too bad thankfully and sowed some quick crop salad leaves and radish in a space that's appeared there, where the first early potatoes came out. 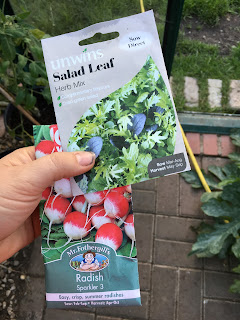 I tested out a panoramic view, so this photo is slightly distorted but you get the idea.

Soon it was time for tea and I decided to cook one of the hams we've had in the brine.  It's been in since Sunday so over a week which is a bit too long but after cooking it, it was perfect!  I'll post the recipe another time.  All of the hams will be cooked and sliced for the freezer. 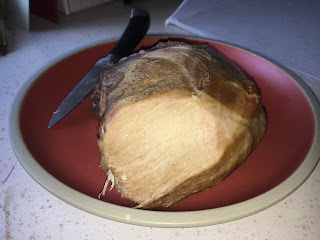 We finished the day off with a walk to forage some bullaces (wild plums).  Someone has already raided our spot but there is a tree most people haven't found yet, and that was full though it did require some acrobatics.  They are in the fridge now. 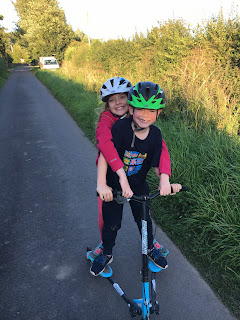 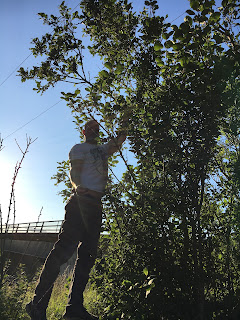 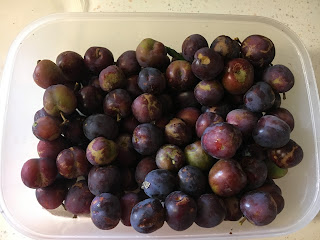 Ste also finished the stock fencing he wanted to get done.  This will deter the chickens from scratching the area where we use as a dumping ground for weeds, branches that are no good for anything, leaves etc etc.  It'll keep the animals safe and the rubbish separate.  It means he can move on to the next part ultimately giving the poultry more space. 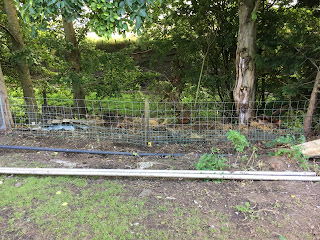 The kids got their craft items done, the dogs are happy and I'm enjoying my time off.  All in all, a great family day together.
Posted by Tracy Chadfield at 13:43