The weekend finally has arrived when we reached an important milestone in our drive towards self sufficiency of meat and took on 2 piglets. 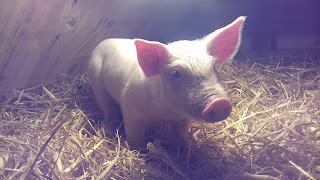 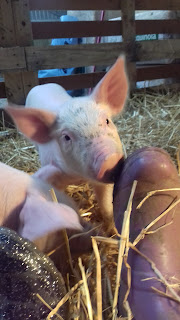 They are large white cross landrace.  Large white are best known for bacon pigs according to the internet, but we shall be keeping these for 6 months and using them to fill our freezer with goodies that we hope to see us through 12 months.  I have no idea if 2 pigs will give us enough meat for a family of 4 for 12 months or not.  I will let you know in 18 months time!
We collected them at 9:30 on Saturday morning and of course used a method of transport most people wouldn't....but that is us all over ! 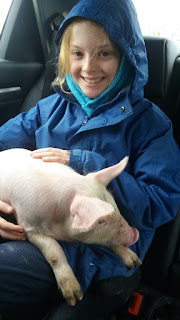 They settled in amazingly quickly considering they have never felt straw under their feet before and have only known their mother.  The farmer, a neighbour friend, was kind enough to lend us a heat lamp as they still need to be under heat for a few weeks yet. 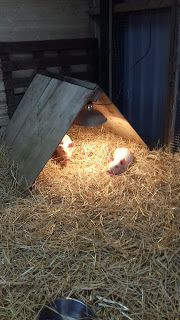 They are from different litters (same father, I need to find the piggy term) but get on well.  Both similar sized, so there's less chance of bullying. 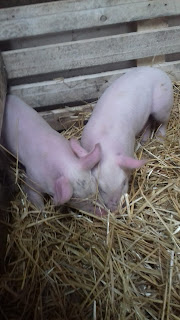 They are very young so we're feeding them their feed in milk at the moment and will eventually get them just on to the hard feed in a few days.  The milk is very good for them anyway though.
Grace named them - not me! Sunflower and buttercup.  They're both girls and will live in the barn until the warmer weather comes, when they then have a job to do.  I need part of a paddock turning over as it's riddled with nettles and weeds.  I hope they do a good job!
We plan on feeding them home grown veg to supplement their hard feed which is their primary feed source of course.
Ste said something that really stuck with me at the weekend.  Our smallholding is nearly complete.  How nice of a feeling is that?
'Nearly' as we have some other arrivals due soon ;)