Well my weekly updates have turned in to a bit more monthly!  Had a few issues with uploads of photos and the fact that January has gone by in the blink of an eye!  Hence the title!
Another week, another month is upon us and another plan is forming. We’re trying to fit as much in to each day as we can as they just fly by! I’ve not been very well for the last few weeks, now I’m not telling you this for sympathy at all, but to highlight how vulnerable we are to our reliance on sooo many things. If we don’t have our health, our homes, our heat sources, supermarkets, electronics and so on, where does that leave us. I must admit it has propelled my thoughts around speeding up the process of being reliant on ourselves as much as possible.
With that in mind, these last few weekends have seen lots of work outdoors.  Sowing seeds of plants that we use regularly and that can be sown at this time of year. Kale (purple and green), tomatoes, leeks, lettuce and radish. I’ve also potted on some lavender that looks like it’s seen better days. Not sure it'll make it.  If it does, it can be used for handmade gifts and smellies. We've worked on the raised beds, more on that shortly and generally started cracking on in earnest. 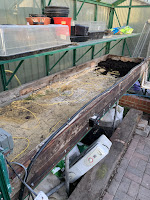 Above is the area in the greenhouse we are (since the photo) using as a seed bed. After this photo was taken, we filled the rest of it with home made compost (feeling quite smug about that). The wires you can see here are heated wires to give a bit of base heat to the seeds.  I like getting an early start with seeds.  That reminds me, I need to order the Alderman peas, we love those and I'd like to have a few different areas with them this year.
It’s been a bit hit and miss weather wise, we've not really had a winter yet but it's been very wet, which has meant we’ve been able to get a lot of work done in the house. The little bedroom which we hadn’t touched since moving in 4 years ago is now done and I am so pleased with it! We managed to come under budget and all in all it cost us around £200! That’s for doing the walls and replacing the carpet with a beautiful wooden floor. It’s used as a dressing room for Grace and I to dry our hair in, so hard floor is easier to manage with people with long hair rather than breaking the hoover again (sorry Ste :) )

We have now started the main bedroom which is a combination of the bedroom and bathroom (en suite).  As with all old houses, as soon as we started it, we knew it was going to be a big task.  We took out the fitted wardrobes as we want to make use of our own furniture that we love and have had for many years.  It's old, classic items, we aren't in to replacing things frequently and especially when not needed! 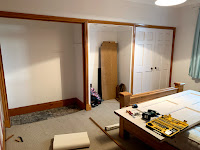 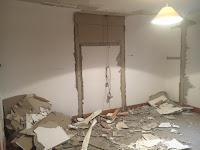 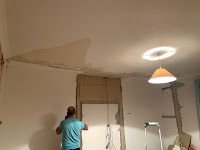 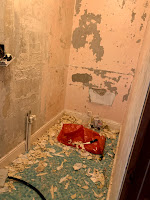 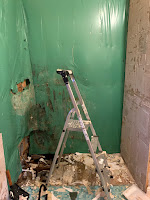 Once the wardrobes were removed, it pretty quickly showed the issue with the ceiling!  You may or may not be able to tell from the photos, but there is a big bevel in it!  Turns out it needed a bit of TLC and re-patching to get it level (ish) and safe again.  Ste and my Dad got to work on it really quickly and in no time at all, the repair was done and we are ready to move on.  Now for the mammoth task of stripping the wallpaper from the ceiling which is a killer on your arms.  Not looking forward to that one.
Back outside once the weather allowed and dear me, another case of where do you start initially.  With a plan, that's where.  We are done with January's goal of the veg plot planning of what's going where but in order to be able to grow these things, we need a nice soil structure to work with and ease of access to the beds.
So we've cut a hole in the fence to make a new gate for access to another part of the veg plot.  This is 'before' on the top left and Ste working on it and getting the copious amounts of barrowed muck down on the top right.  We're going for as much no dig as we can from now on, we simply don't have the time and life is FAR TOO SHORT to keep weeding and losing every year. 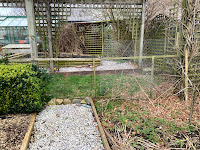 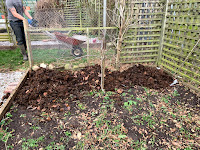 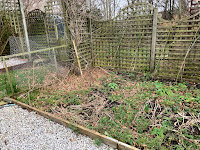 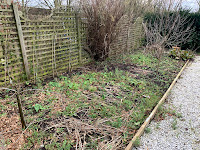 It looked great when it was finished and a membrane finish below, to keep those pesky weeds reaching for the light. 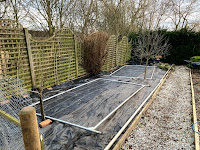 I also wanted to share with you some life and doggy updates as I feel it's been a while.  We have some big changes coming at the end of Feb, start of March which I will share with you then.  For now, our 3 lovely dogs are still enjoying life on the smallholding.  Annie will be having a litter of puppies all being well, later this year.  Here she is giving Buster a cuddle. 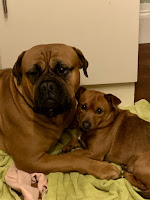 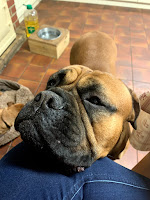 And watching me do anything and everything! 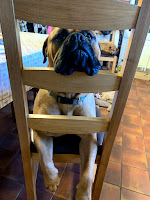 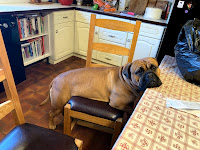 Rodney spotted something in the rafters in the barn, which frustrated the life out of him!  He had to just sit and watch instead.  Before going to stand on the picnic table and feel king of his castle. 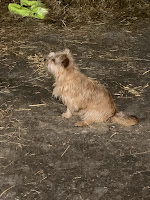 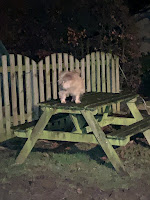 The kids have loved being able to get out more. 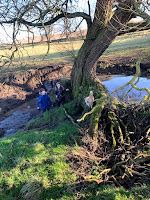 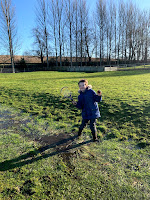 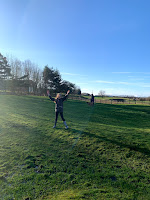 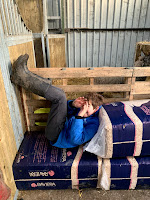 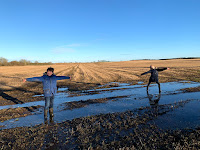 We're so lucky to have all of this literally on our own land and from our own doorstep.

Above is the view from the kitchen window on one of the light frosty mornings we have had.  I will never ever tire of this view.
Another thing I have taken great pride in lately is how well Grace is coming on with her cooking and household skills.  Jack will follow suit but as he's 3 years younger, he is at a different skillset right now.  Still, they both are involved in the household discussions, budget reviews (boring but essential), cooking and meal planning etc.  Grace helped me make croutons for the freezer when the breadbuns were too stale. 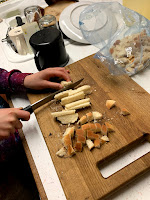 I also made, well, tried to make a jelly from gooseberries and cherries.  It didn't set, so we now have a kind of cordial, come syrup!  It won't get wasted, but we will need to be inventive I think! 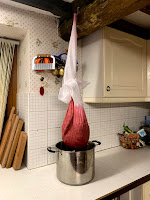 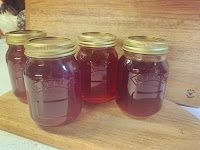 Finally for today, we have a big birthday rapidly approaching on Friday - Grace will be 13!!! So there's a cake to make and good times to be had!  Which ties in nicely with my post title, how the hell do we slow time down!!  All thoughts welcome :)

I hope your January was a happy one.  We had a great time and feel in a great place to be starting February.  If it wasn't, I wish you a happier February.  Take care bloggers.
Posted by Tracy Chadfield at 09:58